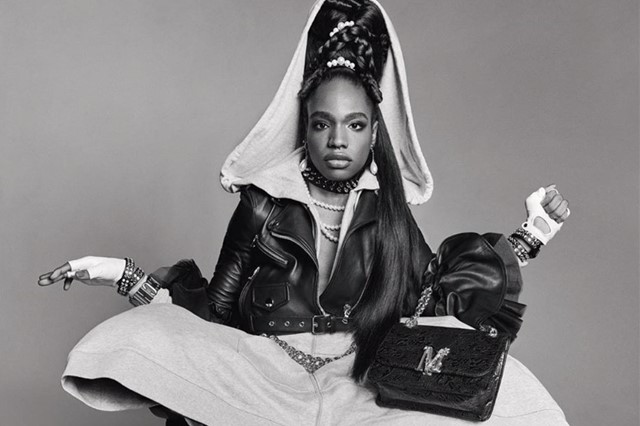 Meet Aaron Philips the face of Moschino Fall’2020 ad-campaign, Aaron is a 19 year old antiguan-American model who is managed by Elite model management- Newyork. She is a Disabled, Gender Non-Conforming, Teen Model Storming the world.

She took it to tweeter back in November 2017 saying, ‘honestly when i get scouted/discovered by a modeling agency it’s OVER for y’all! by y’all i mean the WORLD! it’s real inclusivity/diversity hours folks, get into it!’

She has since then taking over the world, she’s been booke by many brands from paper magazine to Asos, the Bronx-native never allowed her disability to stop her from acheiving her goal, which is to make the fashion industry more inclusive.

Philip is now the new face of Moschino’s Marie Antoinette-inspired collection, the photo series was  a black and white portraits shot by the photographic duo Luigi & Lango. Jeremy Scott is been impressing us lately, he has been breaking down barriers from production of manificient collections since he took over in 2013 to the promotion of inclusitivity and diversity in the fashion industry.

Overall, the adcampaign is average, other than the strong message it sends becuase of the model, we expect more from Luigi & Lango, it’s too predictable. First of all, we shouldn’t know she is diabled in the campaign, despite the fact that she is, it reminds of Winnie Harlow, where her skin condition is there but it’s never noticed.

Check out the campaign series below:

Our Links:
This is a disclaimer to let you know that we use affiliate links and as a customer you do not pay more because we have used an affiliate link. It does not affect you in any way other than a small percentage of the sale may go to the company who generated the link. You pay no more, no less for buying, it’s just a couple of pounds goes to the company who influenced sale of the item. So for you as our customers it’s a way of supporting what we do.

Foods That Aid A Sound Sleep

Advantages Of Adding Coffee to Your Beauty Routine