The 77th edition of Venice Film Festival was a masked, no parties, or celebratory dinners but that of delights of cinematic magic.

The event took place on the 3rd September 2020 on the Lido of Sala Grande featuring a nine-peiece orchestra paying tribute to the late Italian composer Ennio Morricon and British actress Tilda Swinton who recieved the festival’s highest honour – The Golden Lion For Career Achievement.

Despite the global pandemic, the show refused to get stuck, it went on with celebrities in their face masks, and maintaining social distance and avoiding schmoozing. Celebrities were seen elbowing each other as form of greetings to themselves – It’s better to be safe than sorry.

“Two things I’ve been wondering about lately. One: How much, exactly, cinema means to me. Two: How to accept this overwhelming honour with a straight face,” said Swinton, who was dressed in a Chanel haute couture white ruffle tunic and long black tiered skirt. “Cinema is my happy place, my true motherland. Its fellowship is my heart’s family tree. The names on the list of those awarded this honour, meanwhile, they are the names of my masters. They’re the elders of my tribe. The poets of the language I love above others. I sing their songs in the bath. I’m the punk kid film nut hitching a ride to the station to get to the foothills of the heights of their achievements.”

Swinton also went on to say: “I would like to thank our sublime Venice and the most venerable and majestic film festival on Earth for raising her banner this year, the year of 2020 vision, for reminding us that some things are going nowhere…We can continue to rely on the great, elastic, wide, wild, bouncy, boundary-less and perpetually inclusive state of cinema… Viva Venezia! Cinema, cinema, cinema!”  The black tie audience responded to these speech with a standing ovation.
The Venice Film Festival is respected for it’s tenacity, because Italy had one of the biggest hit of Covid’19 during its initial wave, that resulted into a complete shutdown for months.
Jury President Cate Blanchett said it was “miraculous” that the event took place at all. The event’s pre-opening picture was that which was captured by  Andrea Segre – a poetic documentary that includes a calm moment of the city’s confinement.
“We know the festival of Venice will be a sort of test for everybody,” Venice Festival director Alberto Barbera(who  was spotted elbowing Cate Blanchett) said in his opening speech. “And if it works like we hope, everybody can learn from our experience.”
Although the event was delightful but due to the Covid’19 travel restrictions, there weren’t many mega entourages of journalists, producers, general public and distributors compare to the previous ceremonies. Despite all these barriers, we have a few rugged cinema devoted people who pushed through to make the event and kept it successful. The event centre was half filled with attendees only allowed to sit in every other seat following the social distancing rules.  The seats for screening were pre-booked and masked police enforcing the face masks to be pulled up over noses.

No queues and crowd were allowed, the celebrities were only allowed to go mask-free on the red carpet and only approved photograpers were allowed and of course with an approciate distance. Barriers were about three metre tall to keep out germs and over zealous fans – who managed to wedge their phones in the gaps between the raised barriers.

“In our isolated bubbles we have been sustained by streaming images and stories into our living rooms,” Blanchett said, who wore a  shimmering midnight blue and white-trimmed gown by Esteban Cortazar( a gown which she had worn to the London Film Festival 2015). “But I think there has been a vital component that’s been missing and that’s back here tonight: it’s strangers gathering in the dark in anticipation of a collective experience, an event. Cinema comes alive when it’s an event.”

Here are the highlights of the day: 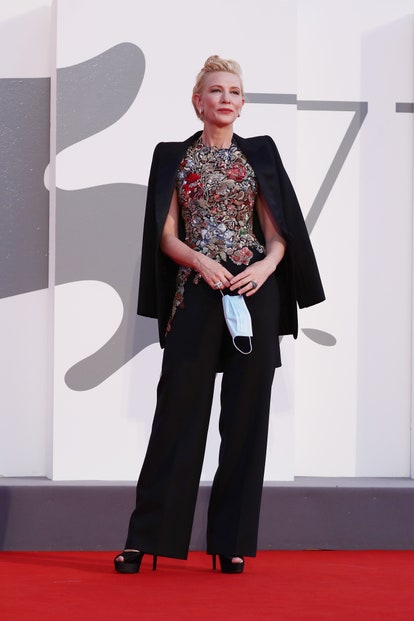 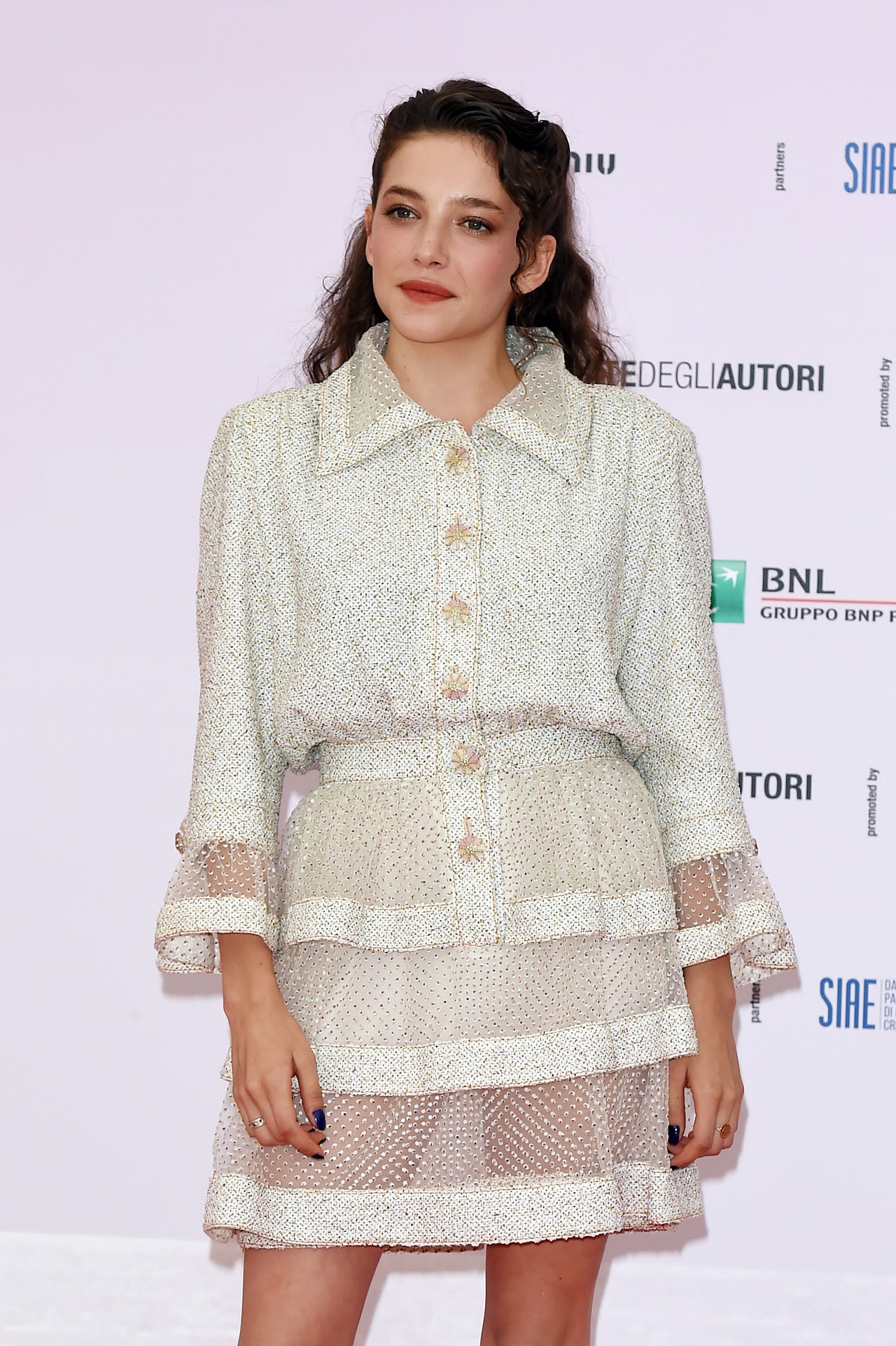 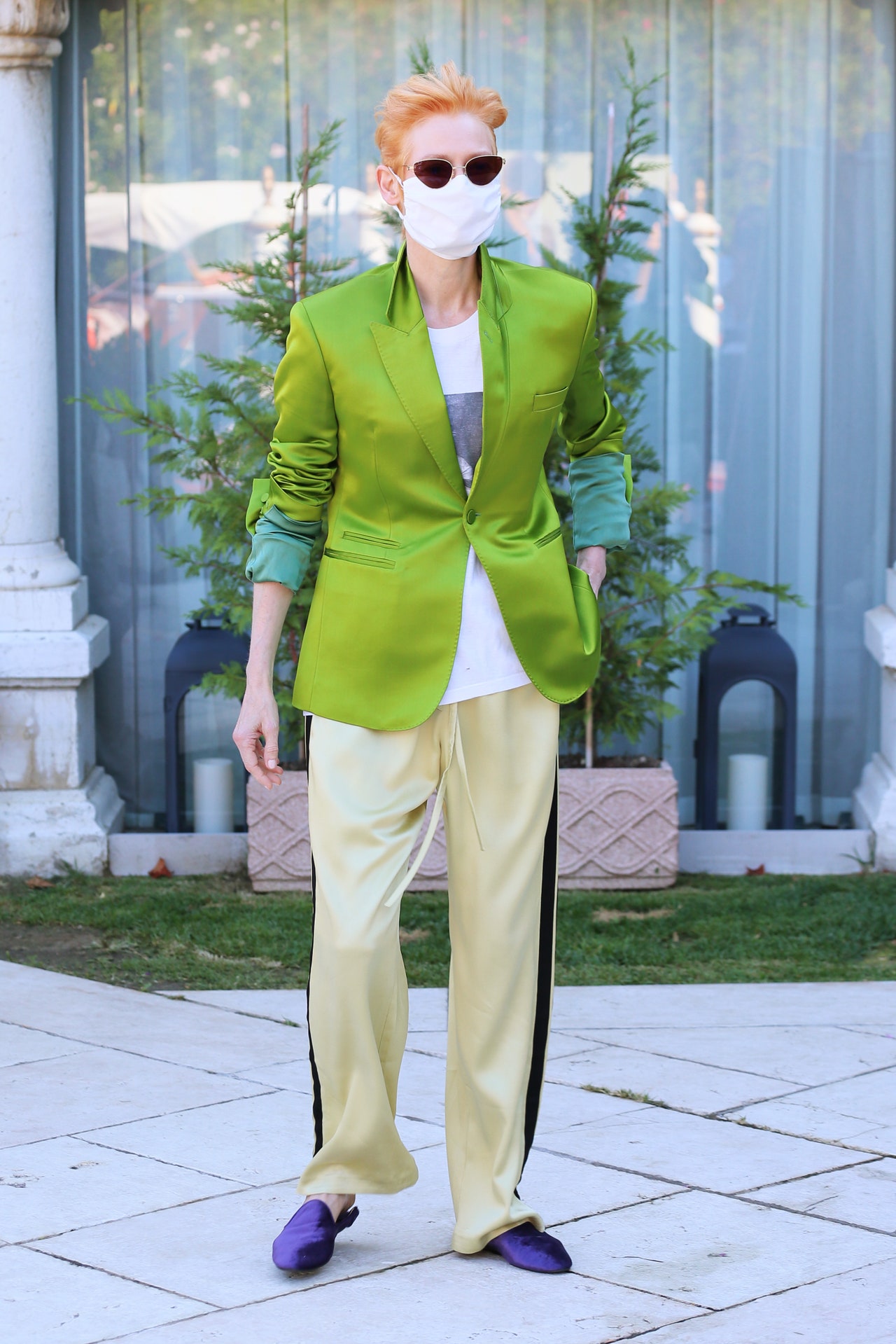 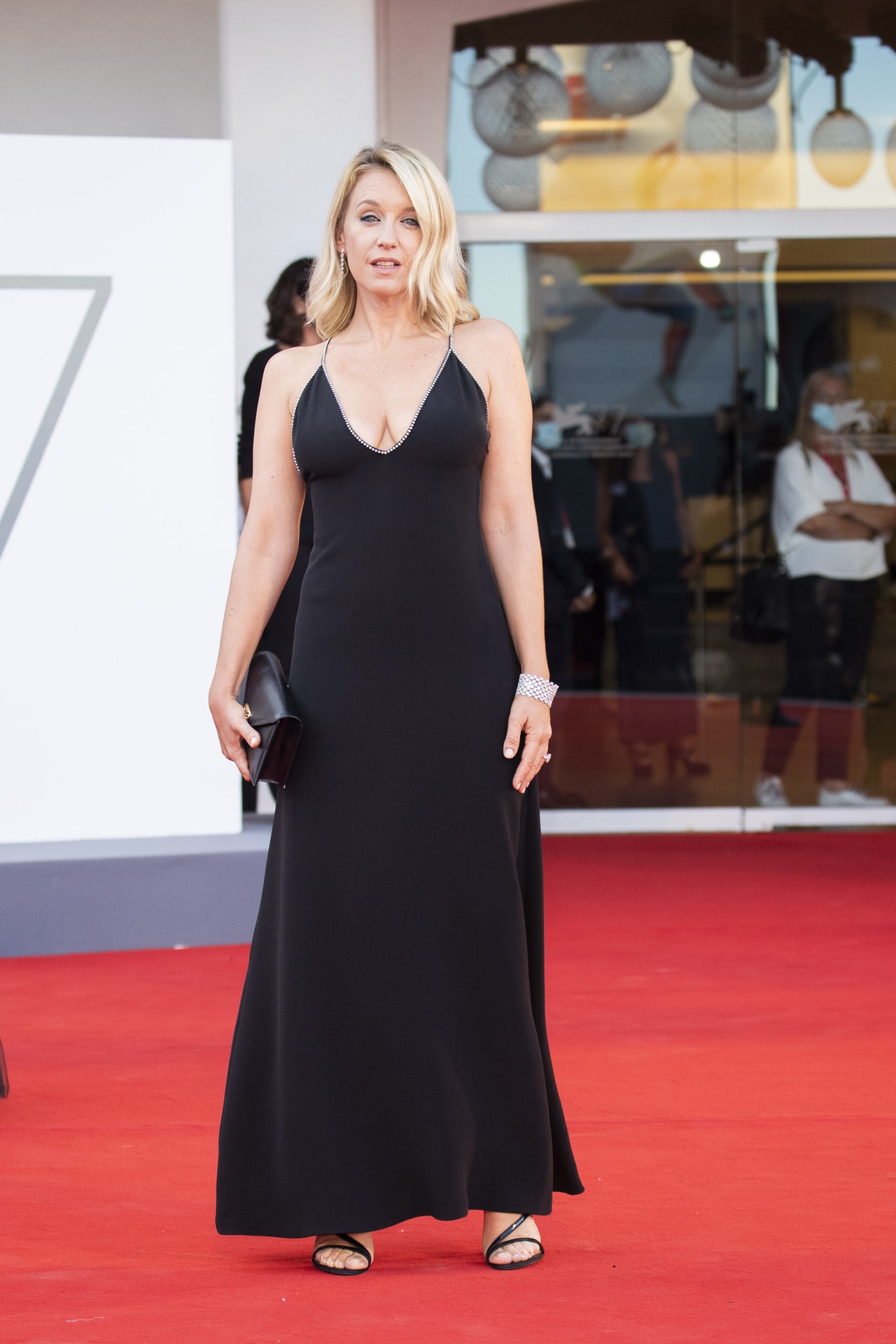 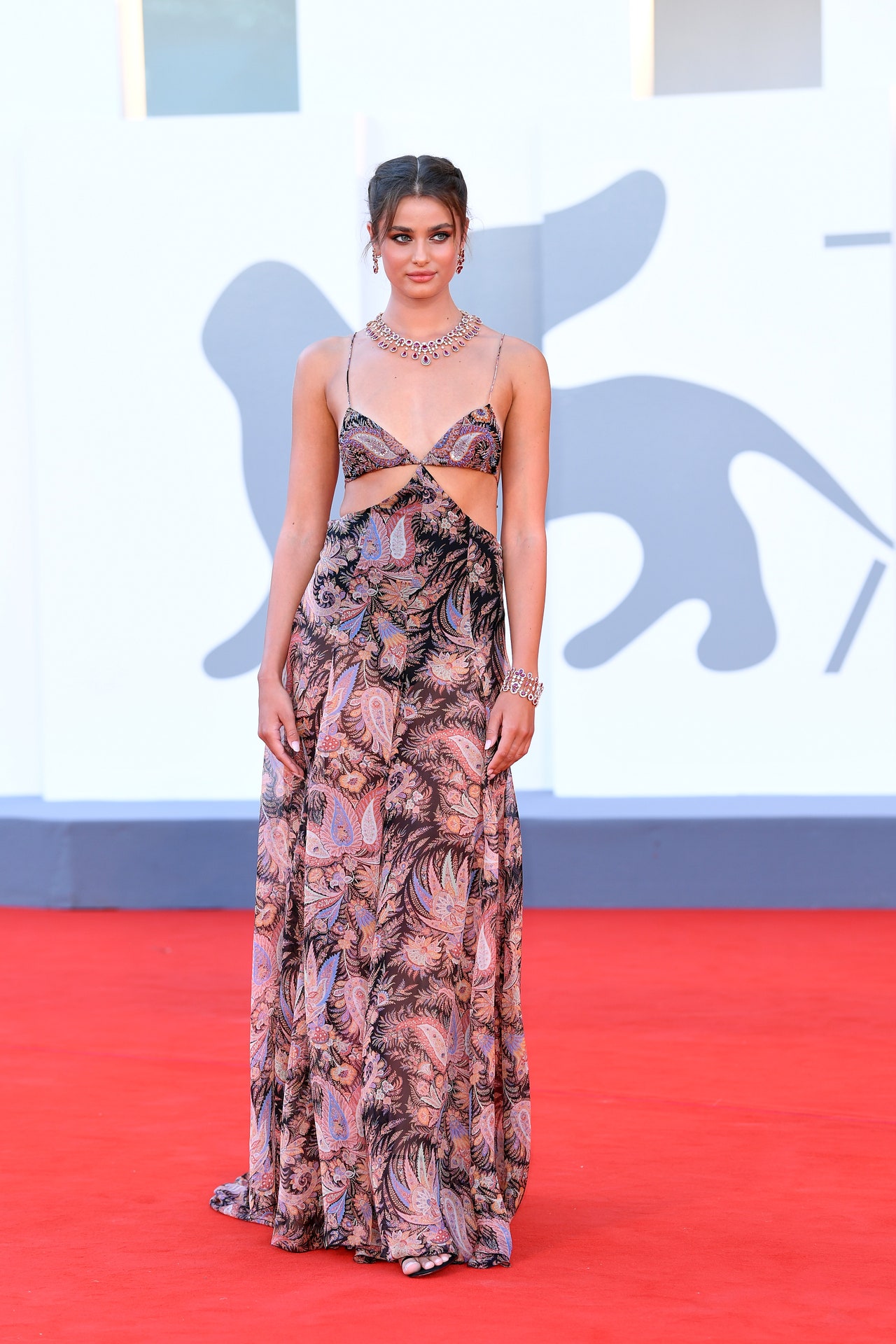 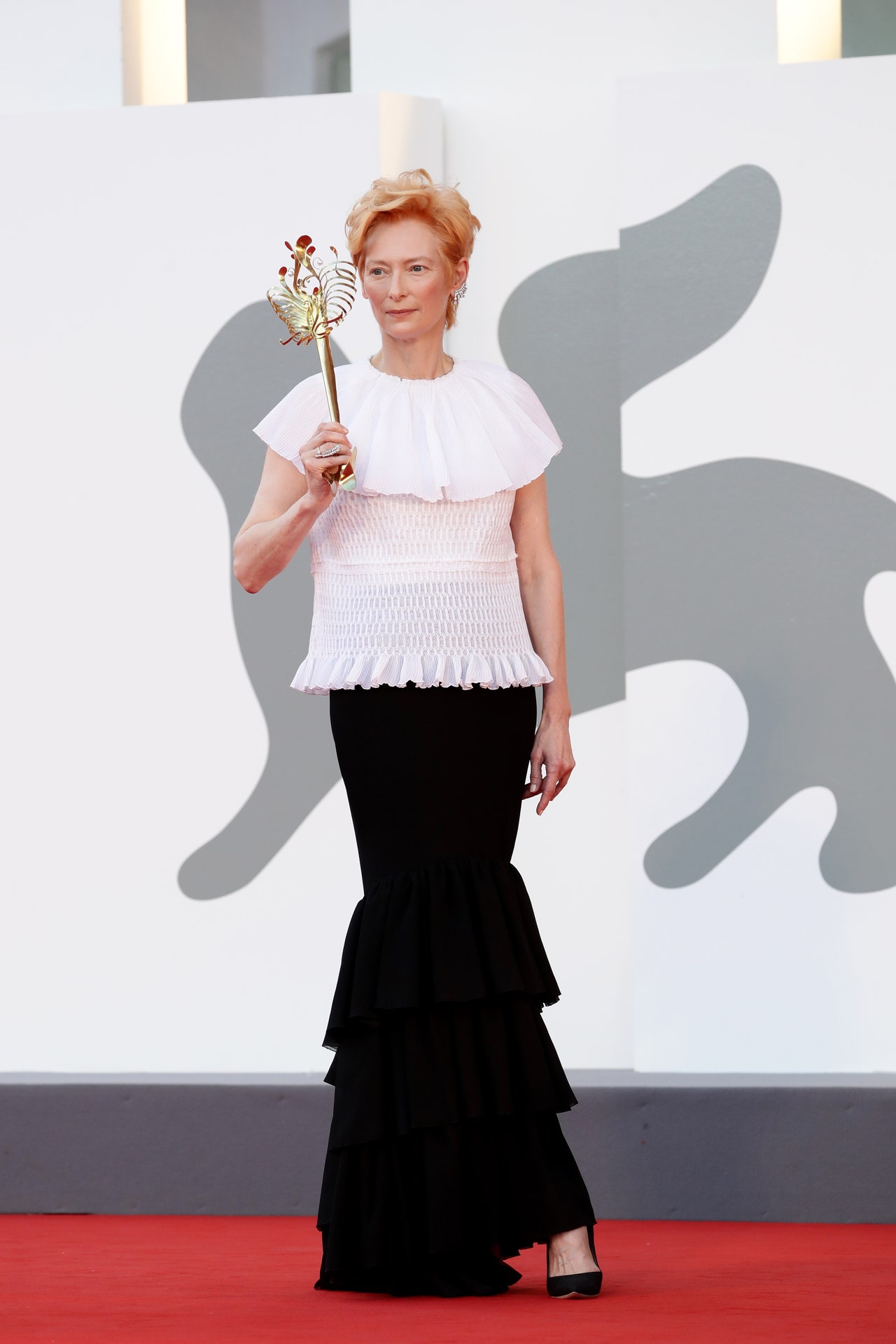 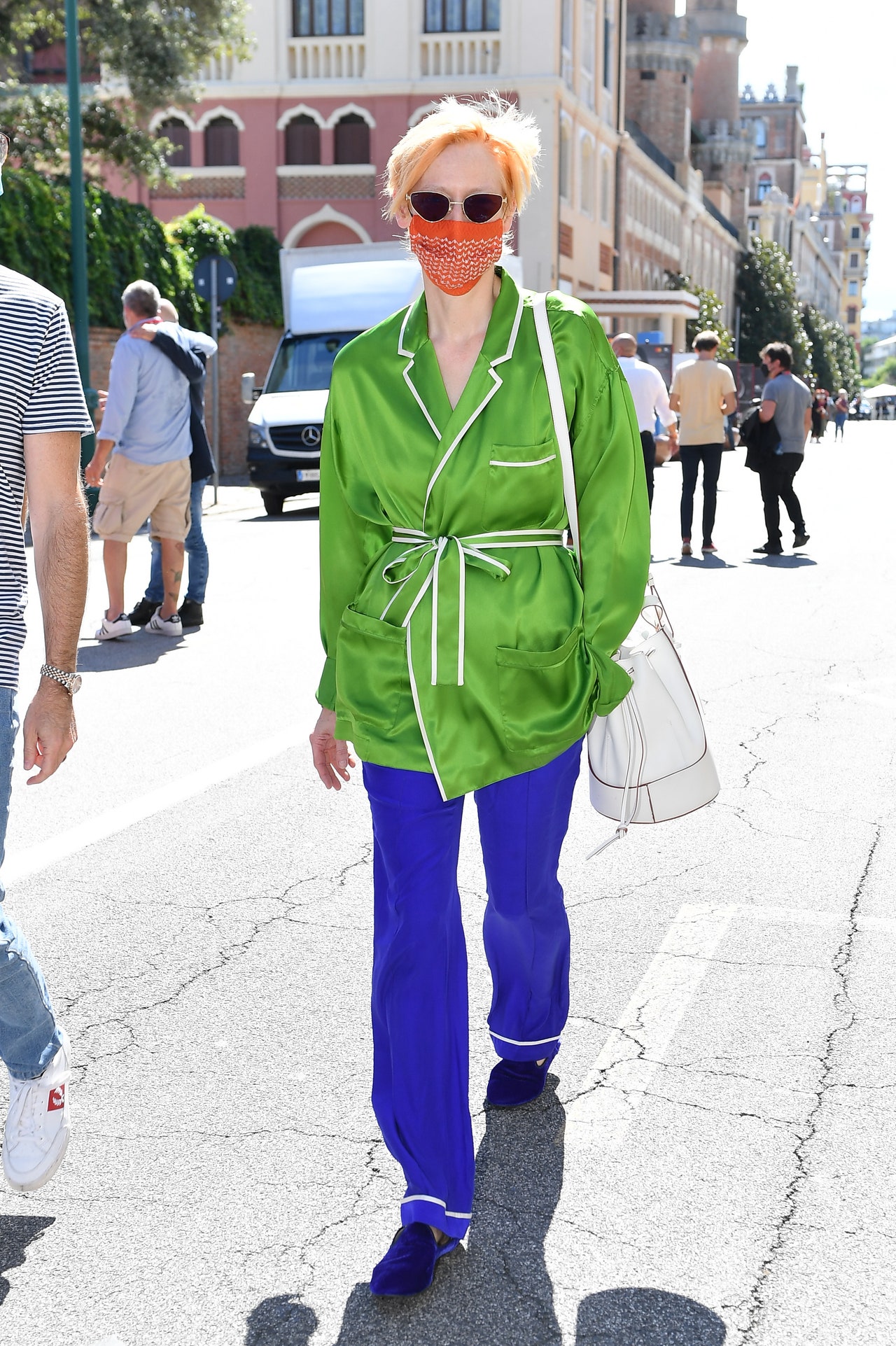 Tilda Swinton in a Haider Ackermann silk pyjama suit, carrying a Loewe Balloon bag out and about in Venice. © Jacopo Raule 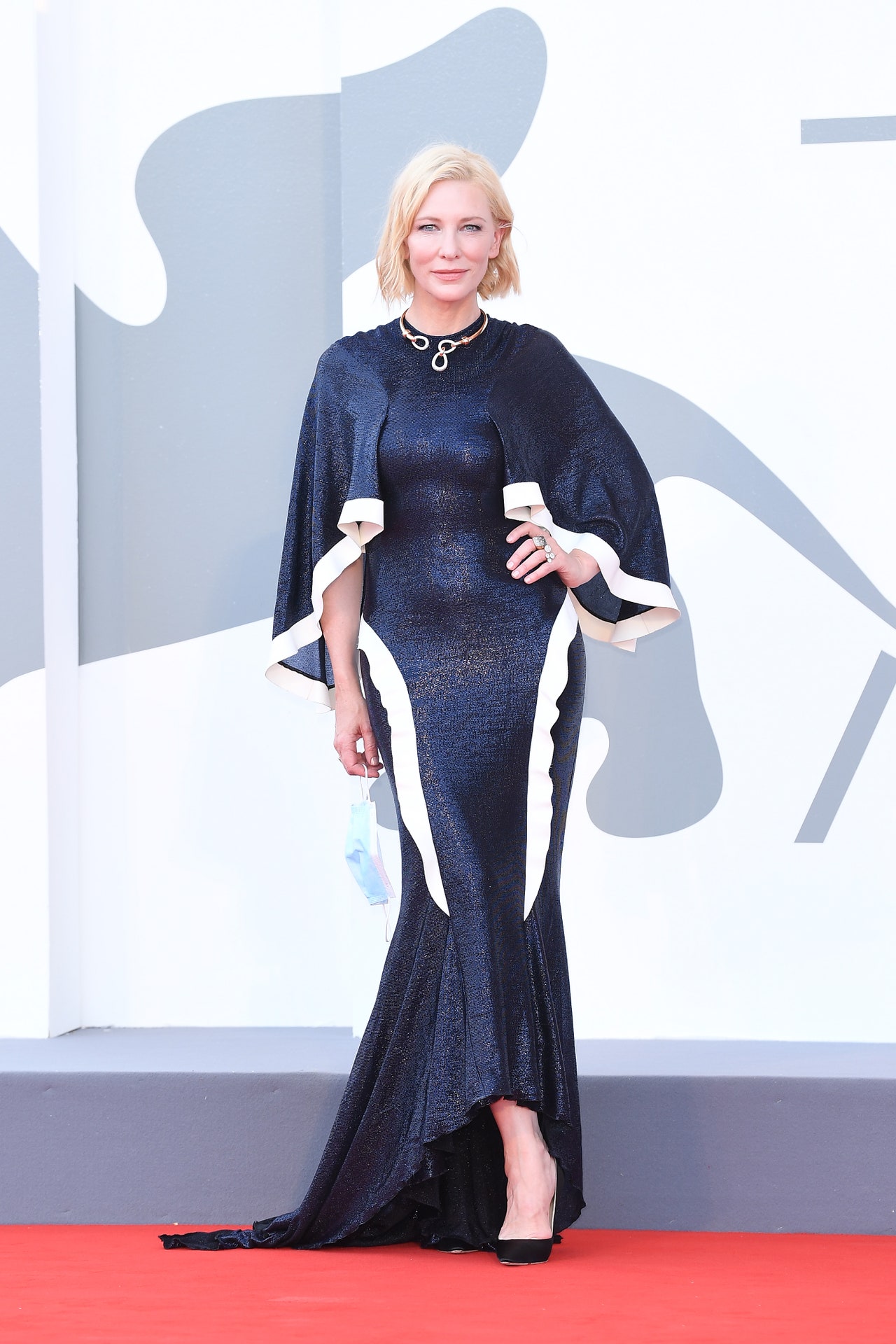 Cate Blanchett in an Esteban Cortazar gown she first wore in 2015, and Pomellato jewels. © Daniele Venturelli 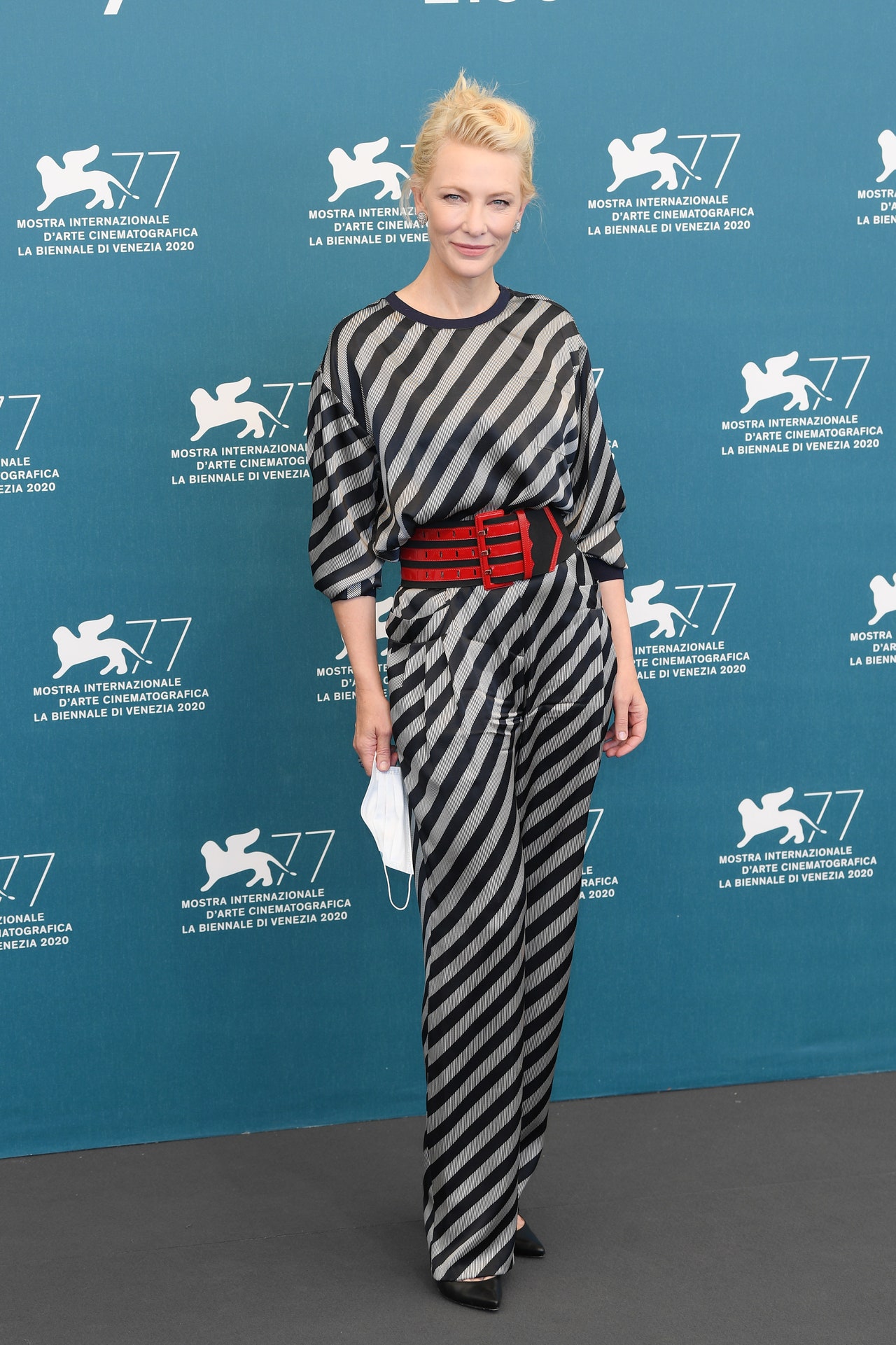 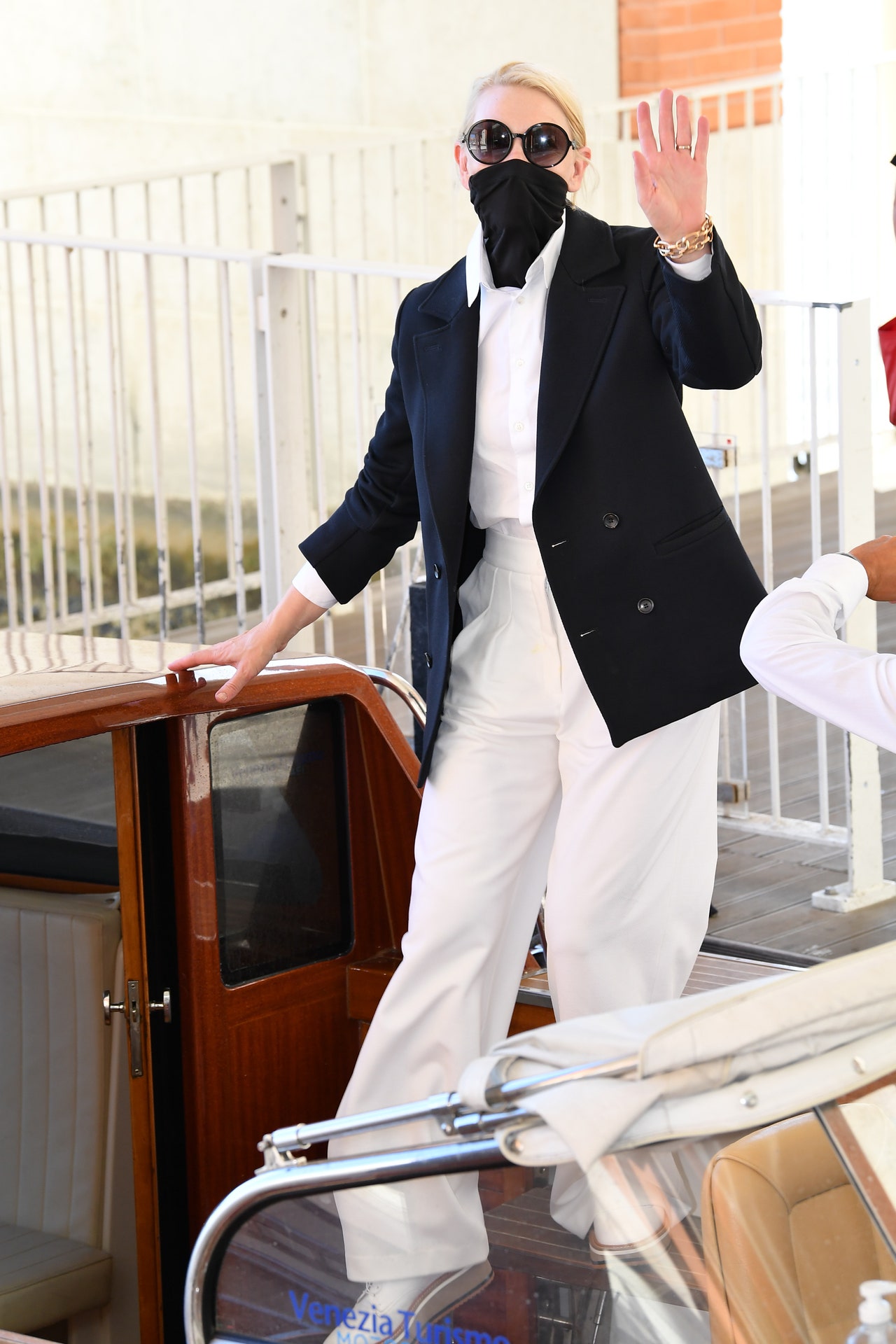 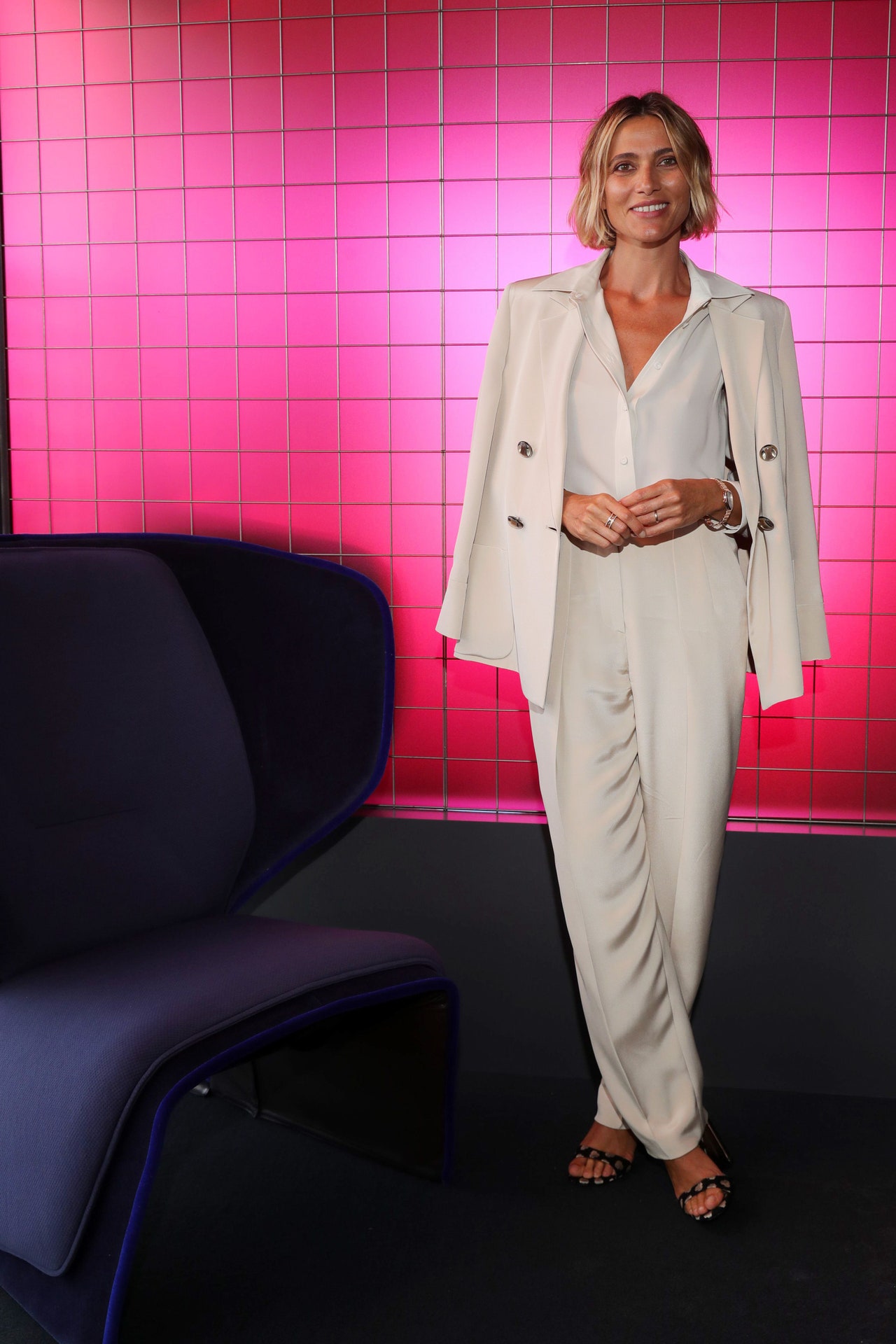 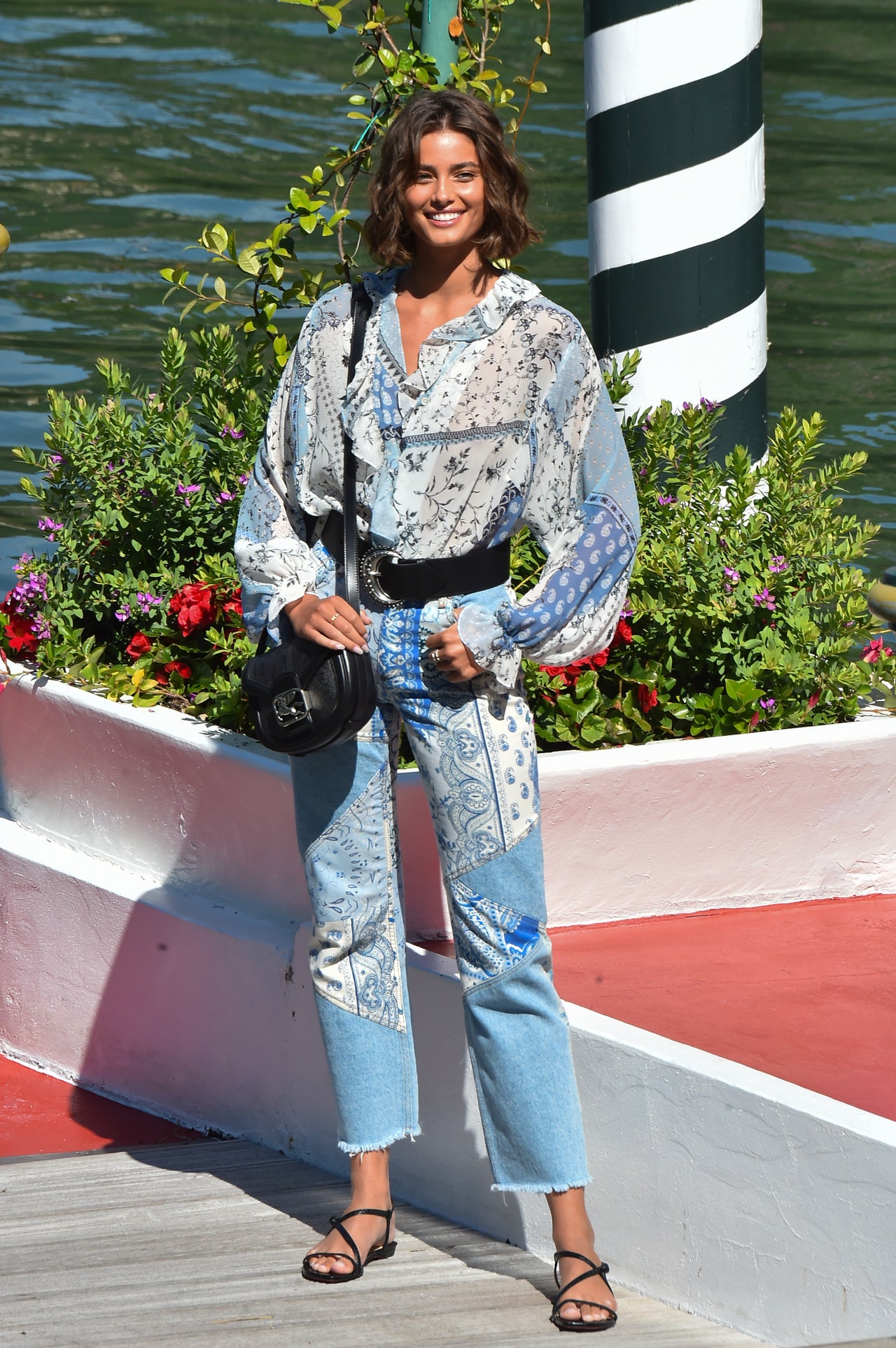 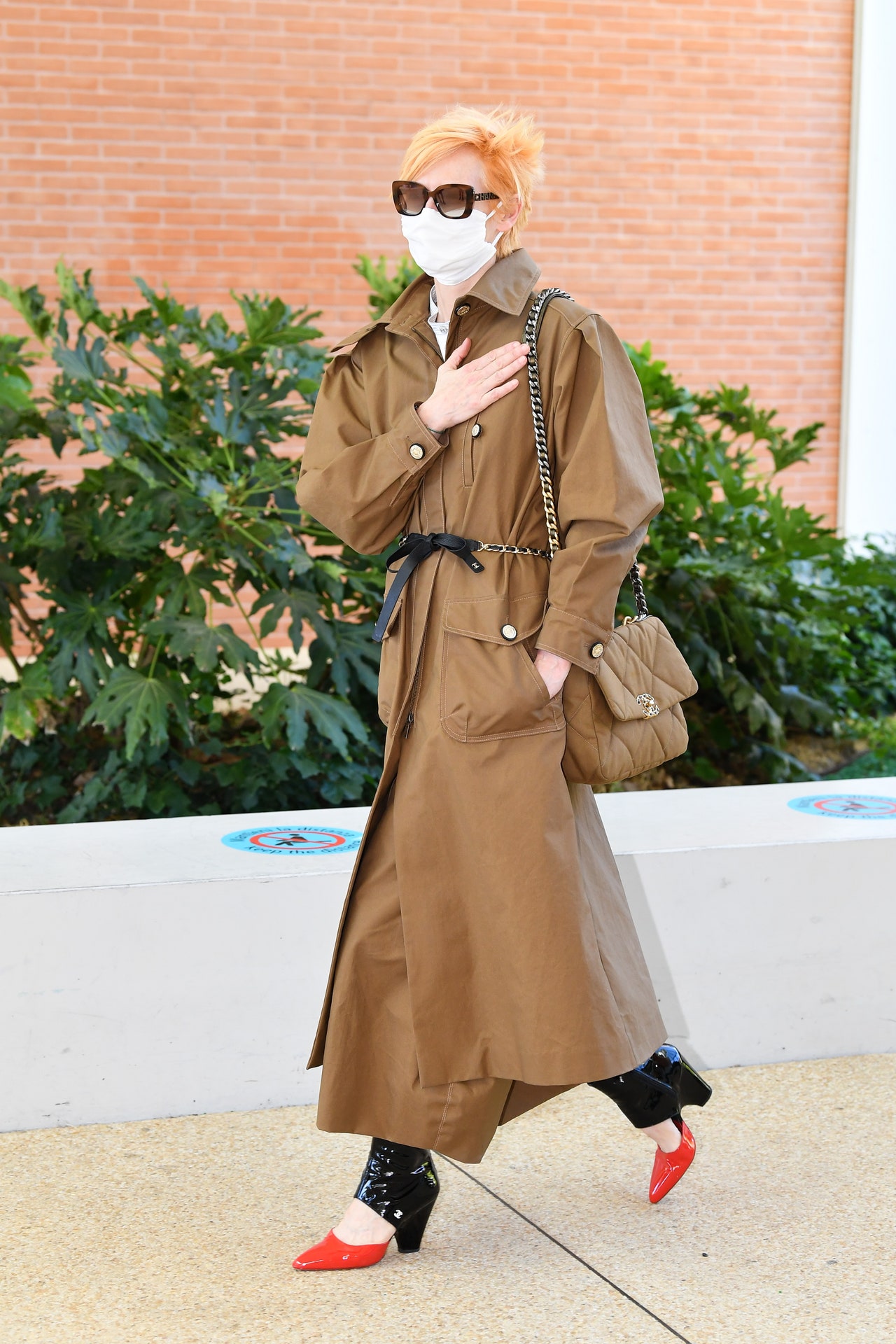 Tilda Swinton in a look from Chanel’s Cruise 2020 collection. © Photopix 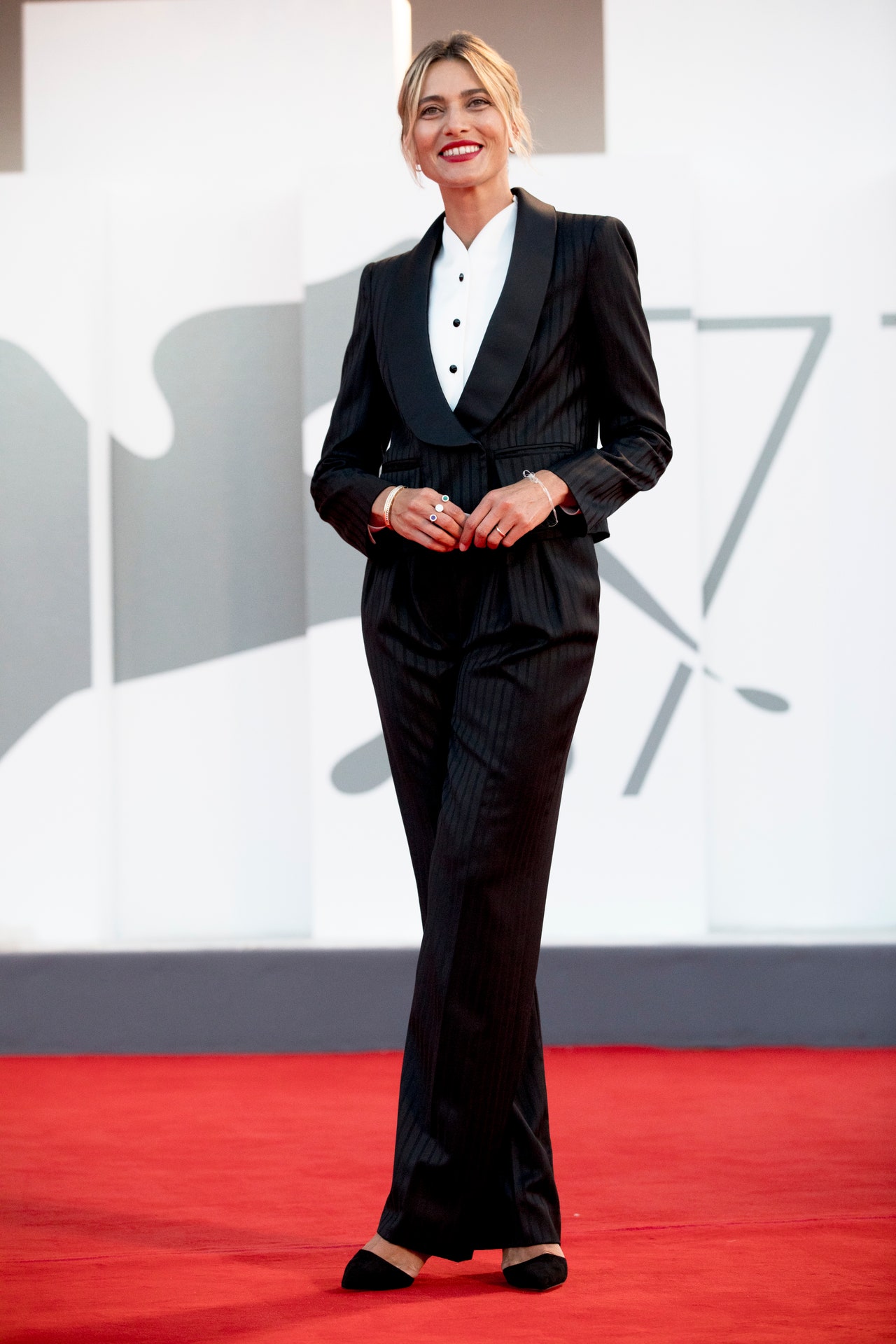