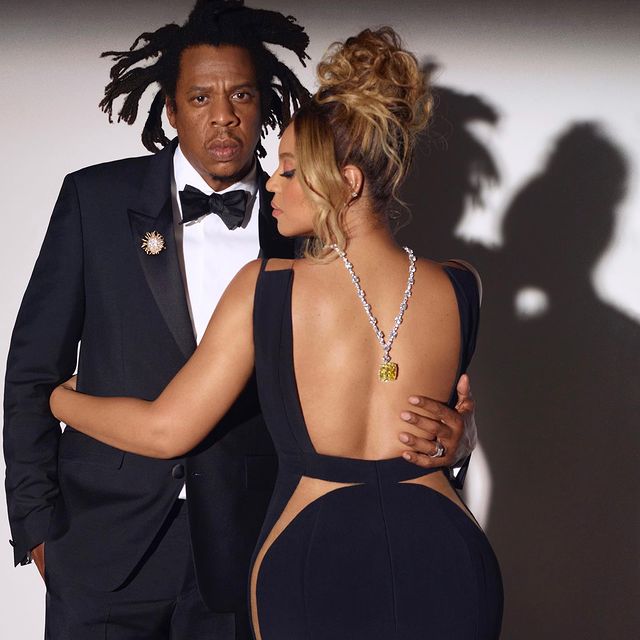 In a recent image released on Monday by Tiffany & Co, the queen and king of hip hop and RnB -Beyonce and Jay Z appear to be the brand’s Fall 2021 ‘About Love’ campaign’s faces.

The couple was spotted in formal wear designed by Givenchy and Balmain. The couple was shot by Mason Poole with a never before seen painting by Jean-Michel Basquiat called “Equals Pi,” a painting from 1982 which has been part of a private collection from its creation until now.

Beyonce was wearing the Tiffany & Co iconic ‘Tiffany Diamond’ necklace – a 128.54 carats diamond with 82 facets that was unearthed in South Africa back in 1877;  and one of the largest yellow diamonds in the world.

According to WWD. the diamond has been before worn by Lady Gaga, Mary Whitehouse, Audrey Hepburn, and now Beyonce who appear to be the first black woman to have worn the neckpiece.

Jayz on the other hand was adorned with a reconstructed Jean Schlumberger’s Bird. A diamond that was a Rock brooch, but reimagined as a pair of cufflinks for the campaign.

The partnership between the couple and Tiffany & Co (part of LVMH) includes a short film that featured Beyoncé singing “Moon River” to her husband. The campaign is planned for more exposure in the next months where there will be digital display on billboards at Times Square Newyork.

“Love is the diamond that the jewellery and art decorate.”