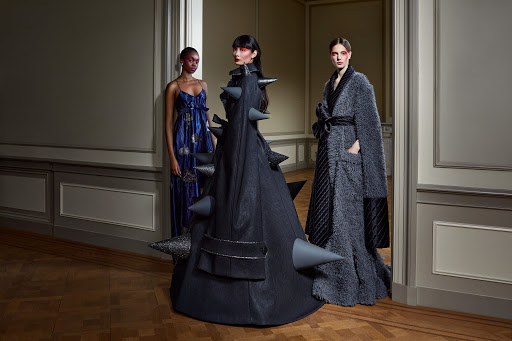 The Viktor & Rolf Aw’20 couture collection featured negligee look dresses, dressing gowns and coats that represent the emotional state of what the global pandemic has caused.

The collection were about 9 pieces of clothing and  of these creations have lace-incrusted emojis; sparkly spikes, hearts and so on. All these details says something about the doom and gloom of the current pandemic which gives growth to  human feelings that resolve in expression of unconditional love. There were  voluminous pink robe festooned with sashes, bows down one arm, canary yellow quilting, and a braid, and the negligees were treated with lovely lightness.The coats were designed for social distancing, the two creative director of the house have always have a thing for voluminous pieces, so this year’s designs wasn’t new to us with the relevance they carry.

The show was a digital debut of the collection in the form of a film – that says bygone salon-style shows. “The situation has been so terrible, it made [us] wonder, Are we allowed to do this?” said Snoeren the creative director of the brand. The second creative directior Horsting said, doing nothing was not an option for them, whatever the case may be “had to be meaningful,” “For years, we have been saying to each other that the fashion show is losing a bit of mystique,” explained Snoeren. “Having said that, if a show is done well…nothing compares to it.”

The film has a campy voiceover that was recorded by singer Mika that captures exact what we go through while out there in the current global crisis, a state mind that says “you will remain in your own safe zone while venturing out into the world.” This message from Viktor & Rolf AW’20 couture collection is very impressive way  to relate with its audience. They were not afraid to face the ash reality of the world we live right now, through their imagination- an imagination that birthed a beautiful collection. At a point, the voiceover offered this: “We all deserve to be loved, regardless of age, color, gender, race, religion, or sexuality.”  The gratitude felt in this message, says alot to its audience – that the world is safe place despite  its shortcomings.

The fashion house used their own fabric stock from local suppliers in Amsterdam which emphasises on the sustainable fabric approach the brand has always follow.

Here is the full collection below: