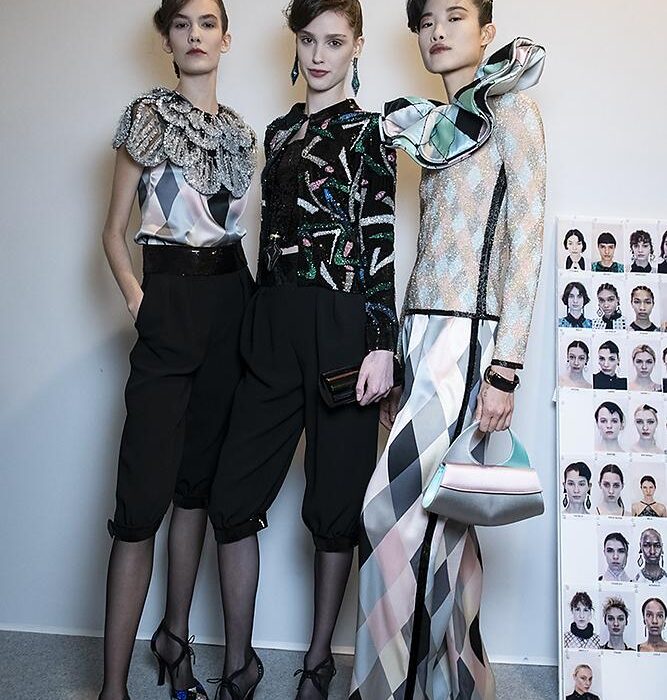 At Paris SS’23 couture week, Giorgio Armani presented Armani Privé’s spring/summer 2023 collection in which the designs were inspired by Harlequin. Harlequin is a character who is always masked and dressed in a diamond-patterned costume, a muted character. In Armani Prive’s SS’23 collection, all the fashion pieces featured the harlequin diamond pattern with ruffles around the neck, sequins, bows, etc.

Knowing Giorgio Armani for its muted runway, if Armani will go edgy think of colours, satin, velvet, etc. Armani is usually known for simplicity with a little edge here and there, but at the SS’23 runway, Lord and behold Armani stepped out with a totally different inspiration, a clown-like character’s sense of style. To be honest, the brave move makes Armani’s audiences fall in love with him the more, speaking from a layman’s perspective, when I saw the runway, I actually wanted to make a stop at the runway to see what I can find for myself, I Love the runway only because I can find myself on it, which I believe many will agree with me.

The runway was edgy, simple, clean, light and sophisticated. Armani said: “I wanted to explore light and colour, so I hope women will take away a feeling of lightness and shimmering, a feeling of joy like the one that inspired the collection: the idea of a Venetian ball where dresses sparkle and seem to dance. I really like the looks with a little ruffle, a white gorget around the neck. Because that soft touch gives light to the face, and I think the first thing you notice in a woman is her expression which tells so much about her.”

Each of the fashion pieces was a ‘whoa’ moment. thank goodness, Armani didn’t go all the way displaying colourful harlequin-inspired looks but kept to his standard of muting its designs whether grande or just plain simplicity. According to Armani, the inspiration came from a Harlequin painting, he said in an interview; “The painting captures the complexity of the character, who is not just about laughter and giggling but also hides a slight melancholy, and then, what intrigues me, is the colour palette, which is not as bright as one would expect. It is Harlequin seen through the patina of memory.” If I will respond to the statement, I will say “it’s Harlequin seen through the ‘mirror of Armani'”, just because of how the brand executed the inspiration in style.

Having sat down, then I thought; it was a couture collection, no wonder the silhouettes and techniques, display attention to detail like diamond-shaped brassieres, diamond necklines, and dresses wrapped to create the lines of diamonds, common in couture pieces. Privé’s take on this season’s couture collection shows how we should wear couture effortlessly, without doing too much, and as the world is gearing/transitioning into minimalism, brands like Armani Prive will be the future.

Armani not only drew inspiration from the fashion sense of a harlequin but also from the emotions the character emits, the mix of emotions of sadness and joy, which is typically what the world is going through right now, having survived Covid’s health pandemic, then come to a famine in the form of rise in inflation, sometimes the only cheer we have going on can be found in fashion. Arnmani continued in his interview:

“Of course, we are going through a very difficult time and sparkling might be at odds with the current situation, but I also think that sometimes fashion can play an important part in lifting up the spirit, It is important to find a balance, so we should be aware of what is happening in the world but we should also let fashion – and its shimmering – cheer us up.”

That being said, how can high fashion be a thing to cheer us up when there’s little to no source of having it, well Armani responded by saying: “The role of haute couture today can certainly be questioned, but I believe it can also be an important way to preserve an immense wealth of knowledge and techniques, a savoir-faire that is truly unique, also, we have to be honest and acknowledge that today there are clients for this kind of product. While for other people, couture can be a beautiful way to dream.” yes, that’s right while some might have enough to buy these pieces to cheer them up at an upcoming occasion or just have it in the wardrobe saved for days an occasion to wear them comes up, those that can’t afford it can also use as a beautiful to keep their hopes up and also find it as a form of art.